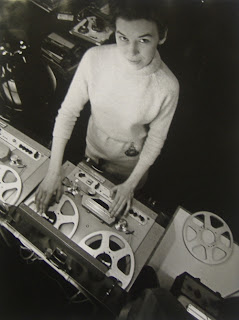 Delia Derbyshire retired from sonic experimentation and music making when the first set of synthesizers came onto the British market. After creating tape loops that ran through the corridors of the BBC and its canteen department, setting 5 individual cassette reels off simultaneously via one linked up power switch when in desperate need of a mixing desk, and creating unusual delays and reverbs by intricate synching up of machines, Derbyshire saw her work condensed into the relatively easy process of twisting a couple of dials on a keyboard, and felt it somewhat undermined her incredible efforts and talents.

From the BBC Radiophonic Workshop archives;

White Noise was a collaboration Derbyshire was involved with alongside songwriter David Vorhaus and long time Radiophonic collaborator Brian Hodgson. The trio had been making an album for nearly a year when Island records, who had been patient up to that point, threatened them with legal action to take back their advance. With the album only three quarters complete, they set about to finish it in one evening. Vorhaus says “I got a friend of mine, Paul Lytton, to play drums to a tape loop for fifteen minutes and we improvised by throwing all sorts of sounds to make this horrific soundscape. After a brief satanic introduction which was edited on to the beginning we had the closing track for the album.”

From the White Noise album ‘An Electric Storm';