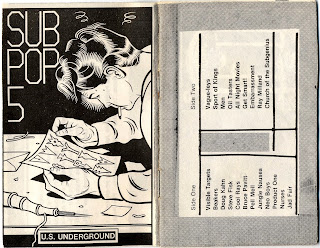 Ever since I visited Seattle recently (for a mere 5 days) I’ve been on a bit of an obsessive trawl through the early Sub Pop back catalogue. I came across some amazing geeky bits of indie culture and thought I’d share them here.

When Sub Pop co-founder Bruce Pavitt was studying in Olympia, Washington in 1979/80 he started a fanzine called ‘Subterranean Pop’ (you can read excerpts of a few of the nine issues here). Soon the name had been streamlined and in 1982, for issue #5, Pavitt put together a cassette of acts based in the Pacific Northwest and Midwest of the US. This was technically the first Sub Pop ‘release’ and only 2000 copies were ever sold. A recent auction of a number of issues, including all three cassette fanzines, shows an asking price of over £6000. Take a look at them here for some serious ‘zine porn.

A majority of Sub Pop #5 is made up of solid, if a little unremarkable, post-punk but there is a great feel to the whole thing (not least because of the warm tapey sound quality). A lot of the names involved pop up much later in the heyday of the Seattle scene and there are some really interesting little nuggets of experimental indie and lo-fi sample-based collages to be found.

The amazing intro to Embarrassment’s riotous ‘Lifespan’, Bruce Pavitt’s own bizarre spoken word tale from his childhood, gritty samples/electronica from Sub Pop producer Steve Fisk, and the charmingly naïve bedroom new romantic of Product One’s ‘It Hurts Me To Remember’ are all really worth a listen. I’ve uploaded sides A and B separately below and will be following them shortly the next installment.

Incidentally the awesome artwork is by cartoonist/illustrator Charles Burns of ‘Black Hole’ fame.

Sub Pop #5 – Side A by Duke_Raoul on Mixcloud

Sub Pop #5 – Side B by Duke_Raoul on Mixcloud